Earlier this week, I brought you a really light and healthy holiday dish--my Vegan Brussels Sprouts Salad. But it just wouldn’t be the holidays without indulging in some decadent side dishes, too. Of course, even at the holidays, we can make our sides whole food and plant based—like this Whiskey Maple Glazed Sweet Potatoes recipe. 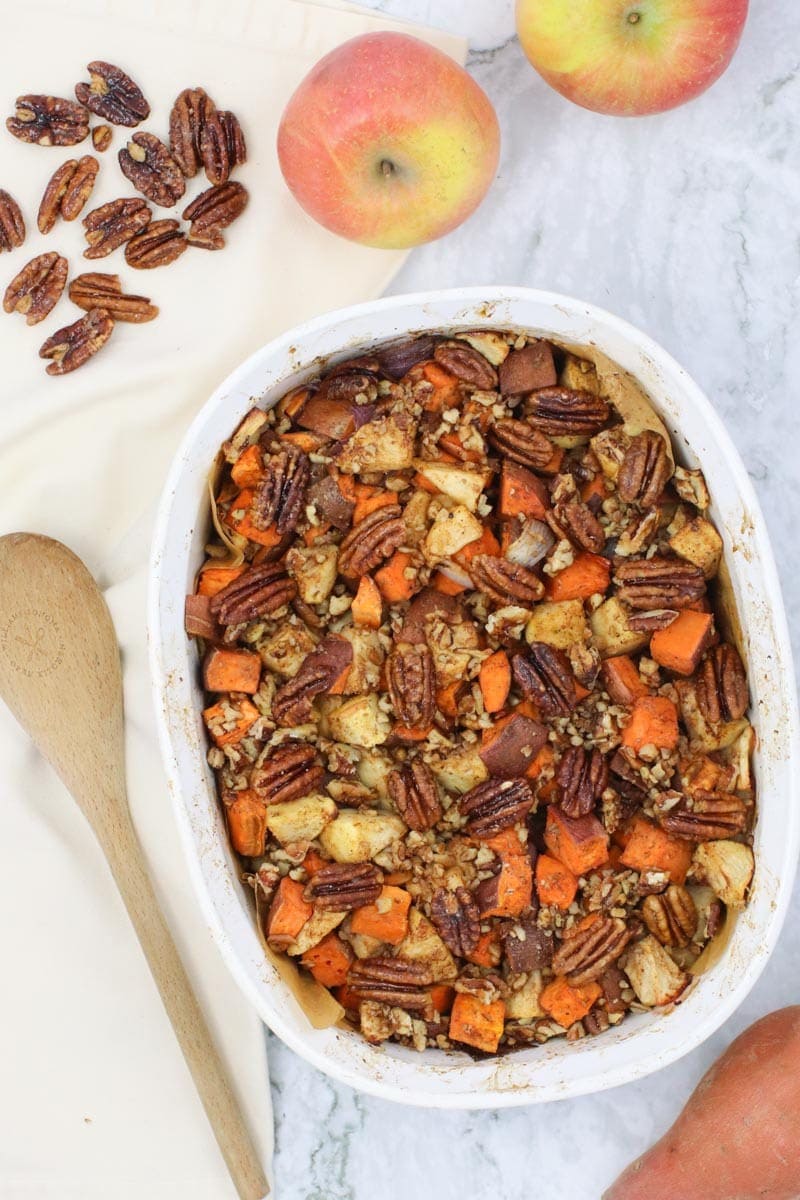 It's not the holidays without glazed sweet potatoes!

In my entire adult life, I can’t recall a holiday season EVER when I didn’t make some kind of sweet potatoes (or yams). They’re such a classic! Yes, sometimes there were marshmallows involved. Yes, some of these dishes were so rich and sweet, they competed with the pumpkin pie. Most of those recipes were creamy dishes like this Vegan Sweet Potato Casserole. 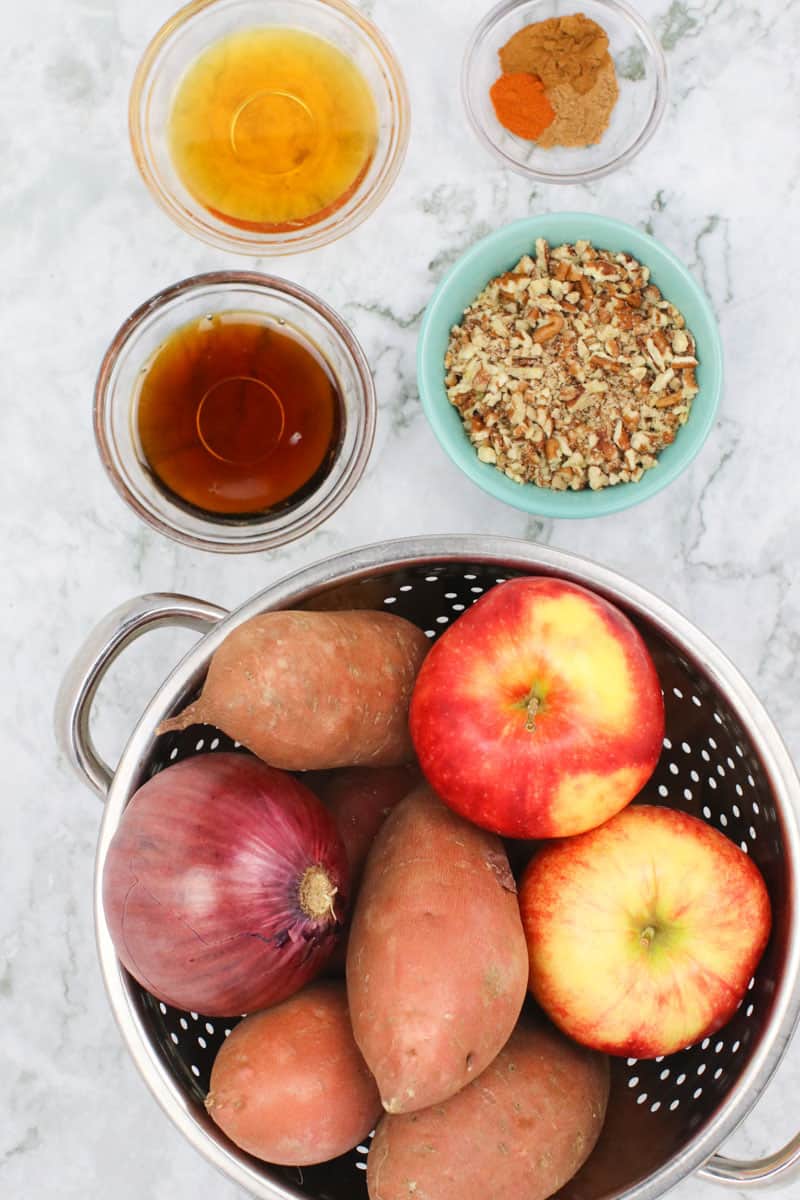 These vegan/WFPB Whiskey Maple Glazed Sweet Potatoes are no less luscious in their own healthier, vegan way. And I was surprised at how much I enjoyed them since they’re made with whiskey--which, much as I’ve tried, I simply can’t stand the taste of. On the other hand, whiskey and maple syrup are completely in my husband's wheelhouse. 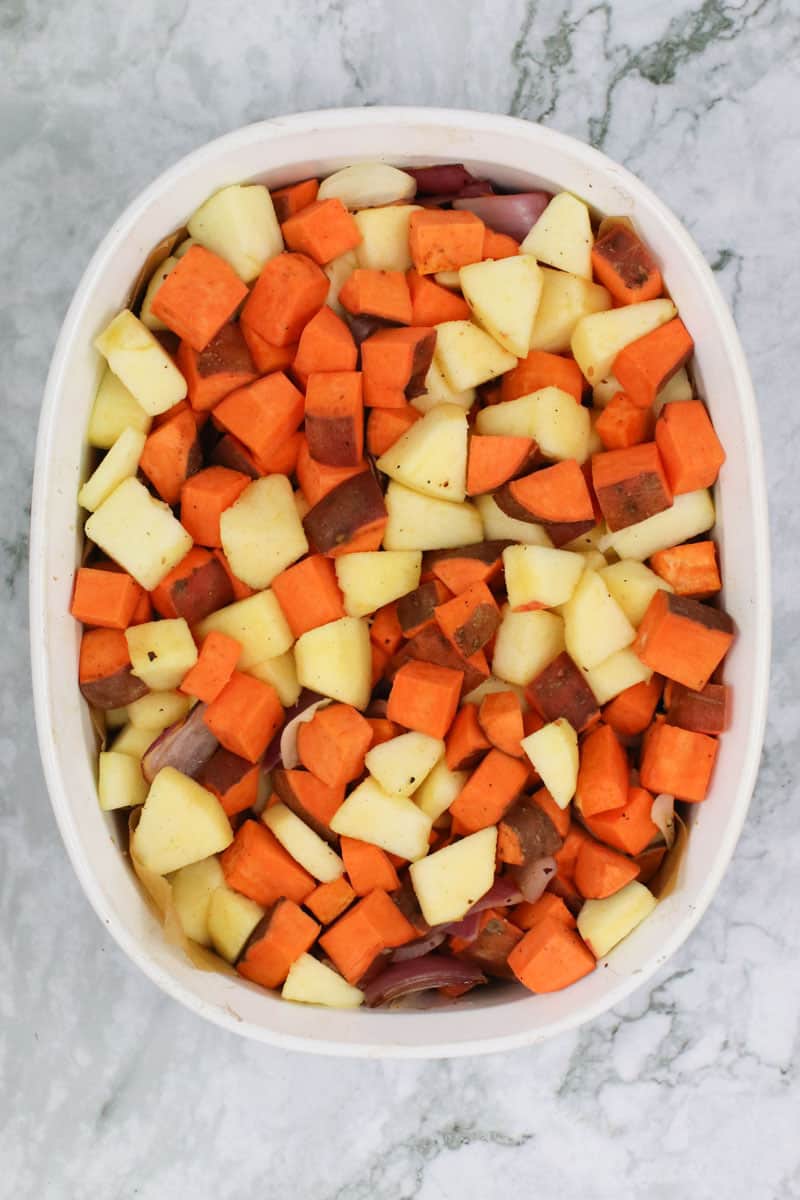 Whatever nastiness I detect when sipping the brown, boozy stuff disappears here, so that all that remains is a wonderful rich flavor it imparts to this dish. Along with a few warming spices—including just a touch of heat from some cayenne pepper—it adds a much-appreciated layer of complexity to what’s basically a simple side of baked sweet potatoes, apples and onions. Of course, the roasted pecan topping doesn't hurt, either.

This whiskey maple glazed sweet potatoes dish is sweeter than I’d typically want in an everyday meal. But all of the sugar is unrefined, and about half comes from the maple syrup, so you’ve got some options here. 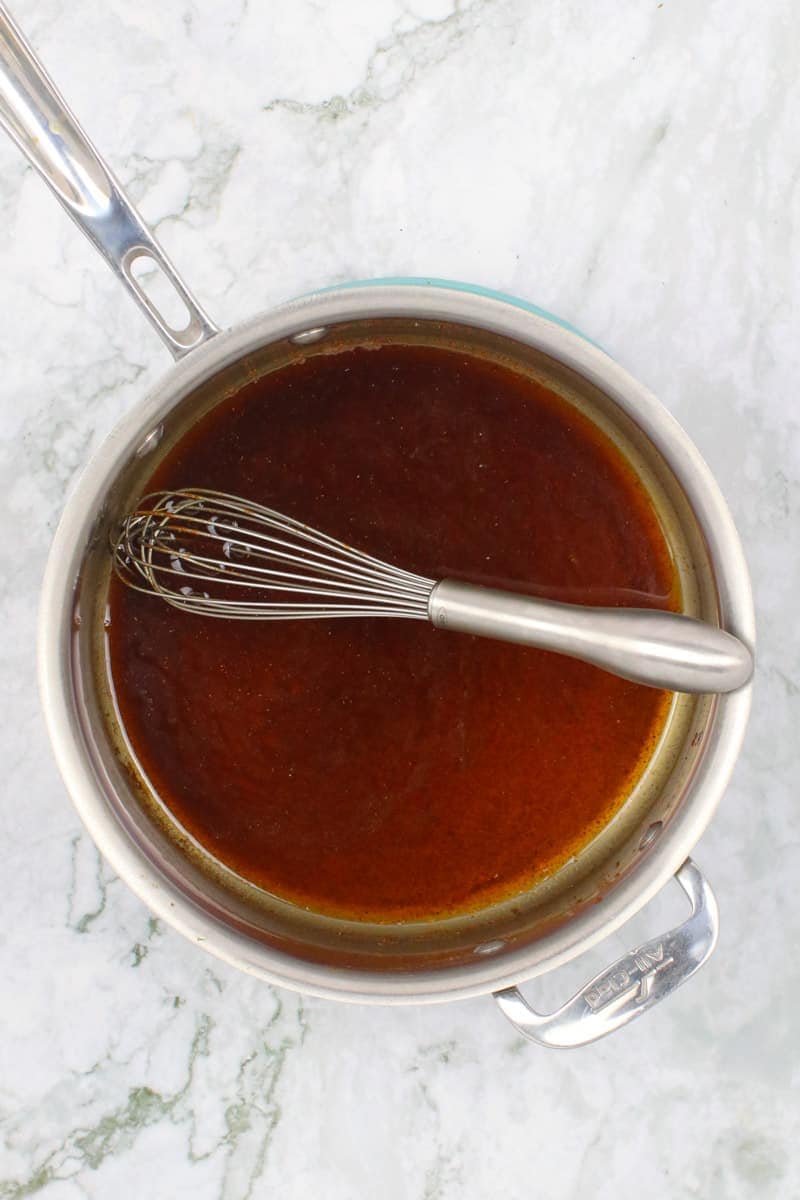 You can use the full ½ cup of maple syrup the recipe calls for (about 3 teaspoons per serving), or simply pare it down to ¼ cup (about 1 ½ teaspoons per serving) and all will still work out fine. And while I haven't tested other sweeteners in this dish, with a little experimentation, you could probably substitute an even healthier sweetener if you choose. 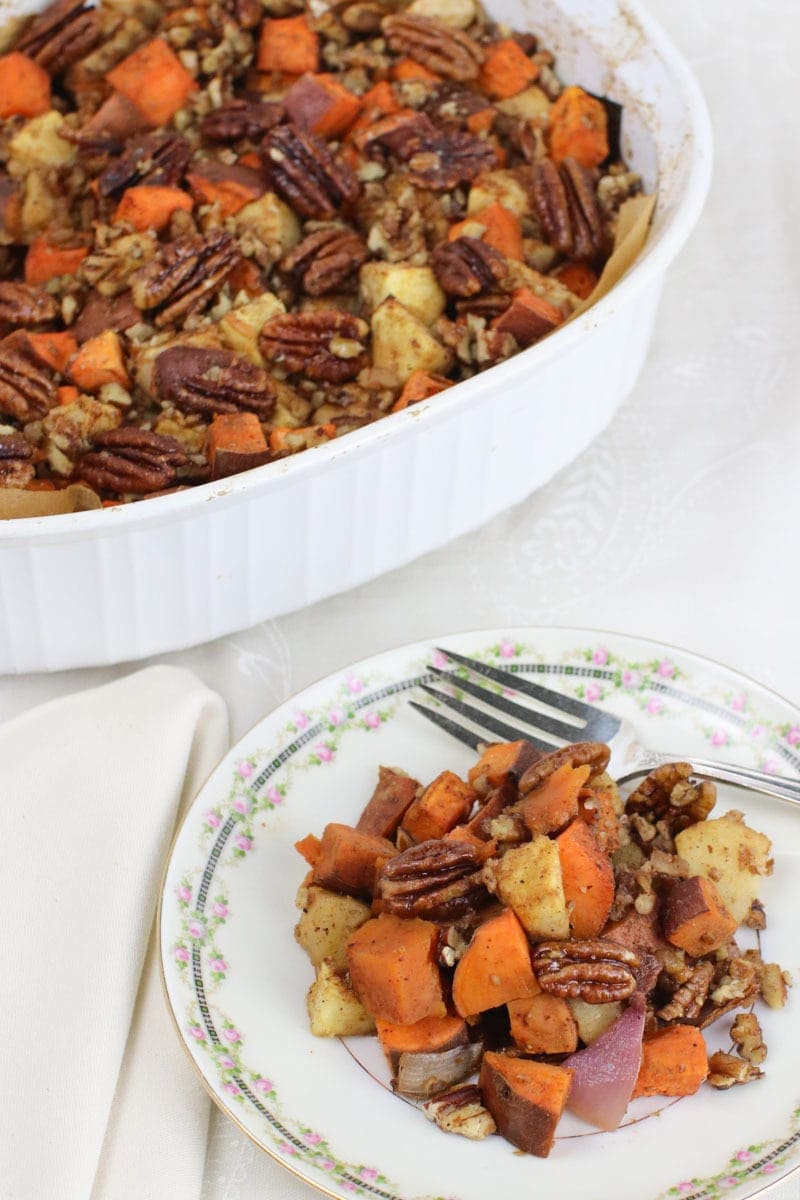 Whatever you decide, we’re still in the 'pretty darn healthy zone' here for a holiday dish. Unlike those over-the-top sweet potato ghosts of holidays past (guilty as charged!), this side dish has no oil or butter (not even vegan butter), no eggs or cream (obviously)--and sorry marshmallow fans, no white fluffy candy topping. But you won't even miss all that junk! 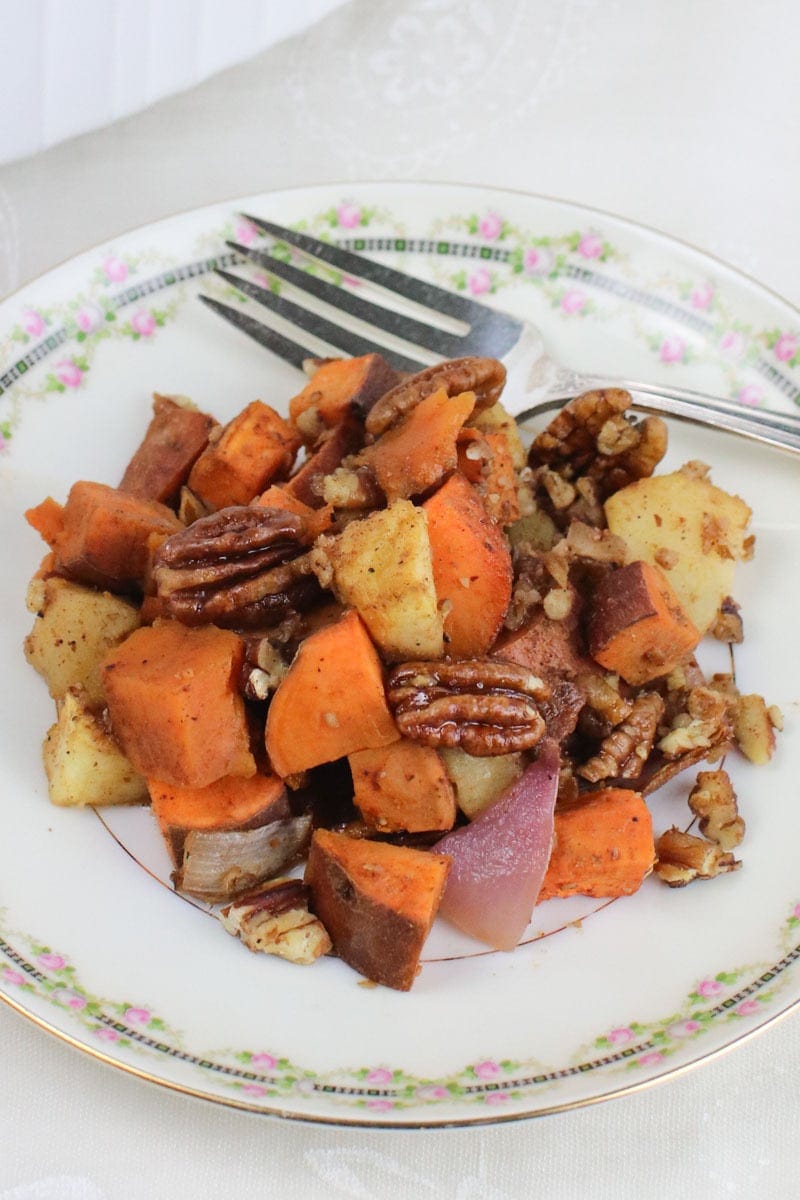 I have a feeling these whiskey maple glazed sweet potatoes are absolutely going to be another one of those vegan dishes that gets even omnivores clamoring for seconds. Just like the Brussels sprouts salad, they were a big hit at our house. 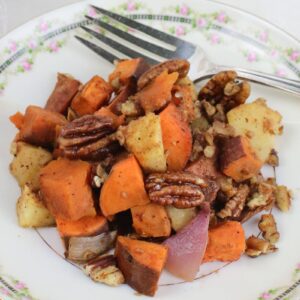