This 10-minute Vegan Spinach Soup with Ginger Broth is light and comforting—with soothing ginger and just enough spinach to boost your immune system and get you back on your feet. 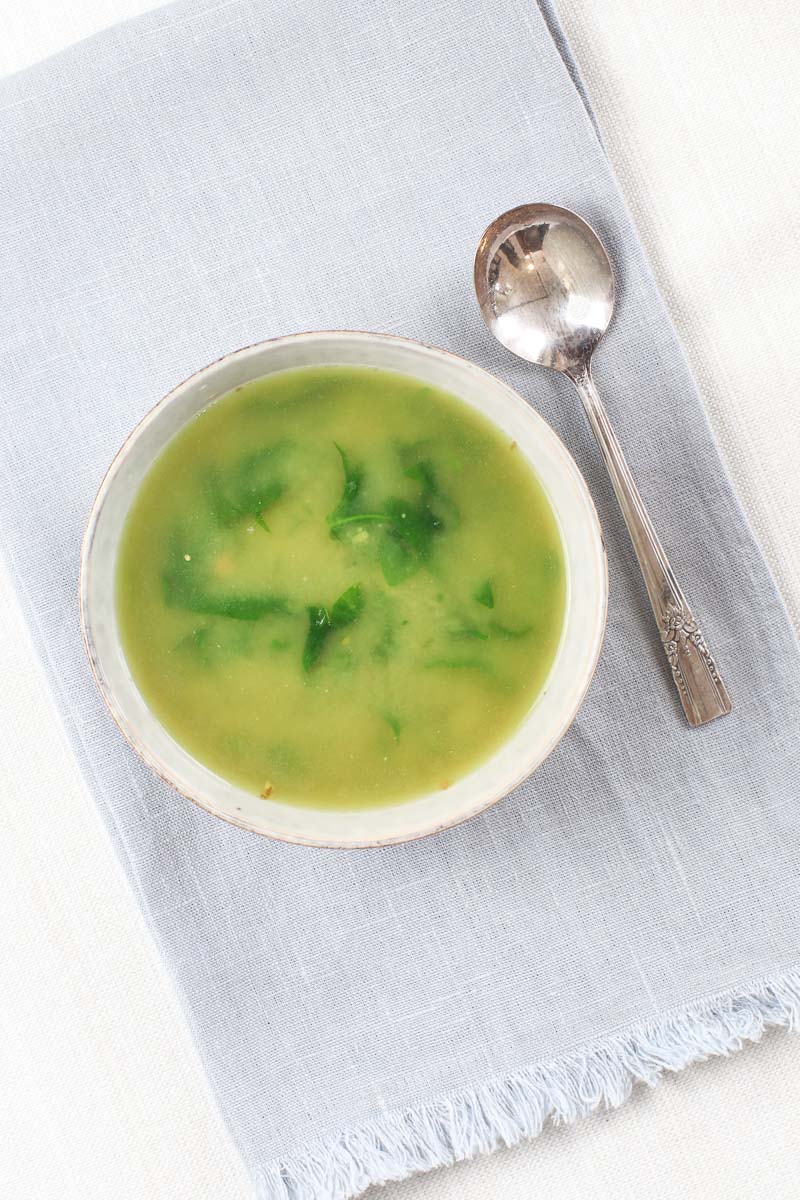 When I get sick—which isn’t often since I switched to a whole food, plant-based diet—I usually crave soup. This Vegan Spinach Soup with Ginger Broth is a healing vegetable soup that’s light and comforting—with its stomach-soothing ginger, and anti-oxidant rich  spinach to boost your immune system and help get you feeling better in no time.

I had been making this soup for years. But I only realized what an easy, healing vegetable soup it is one Spring, when I was down-and-out with a particularly nasty virus. Living alone at the time, I needed something quick and easy I could make for myself. 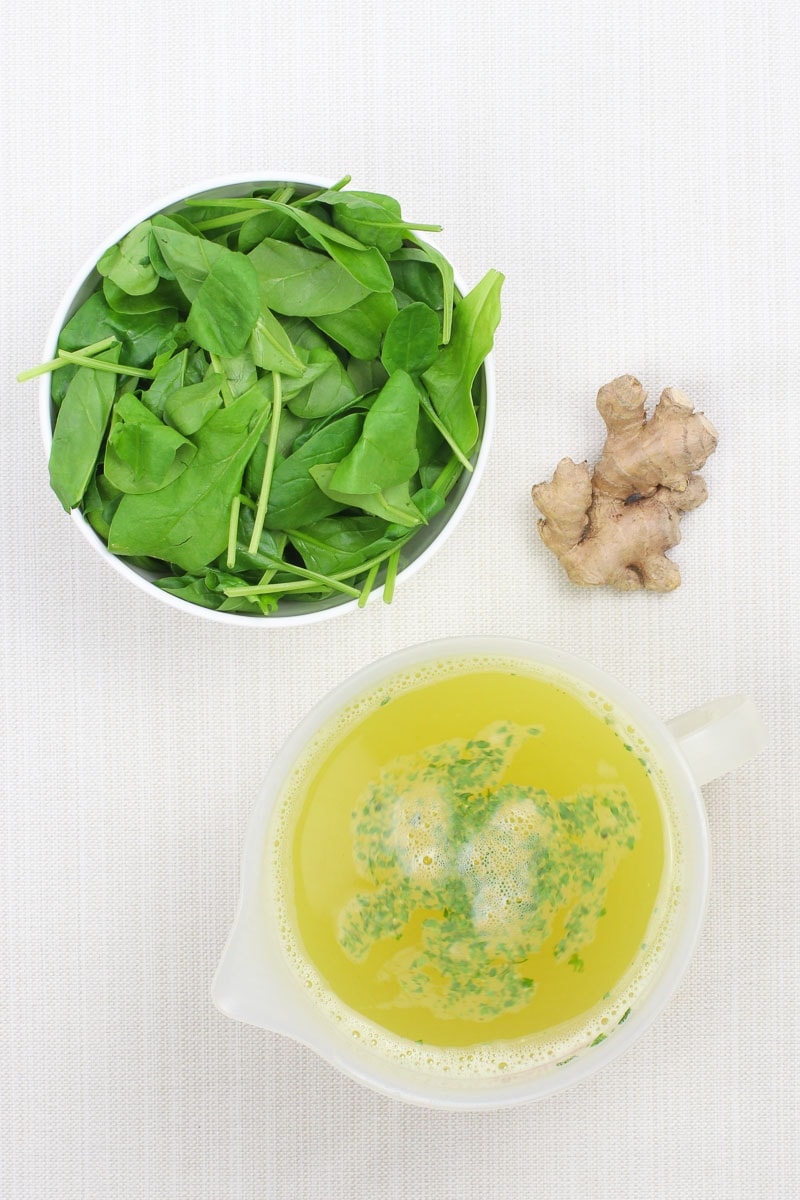 My sister offered to shop for me, and since the basic version of this vegan spinach soup has just three ingredients, it was a quick trip to the store. Once I talked her through where to find the fresh ginger. 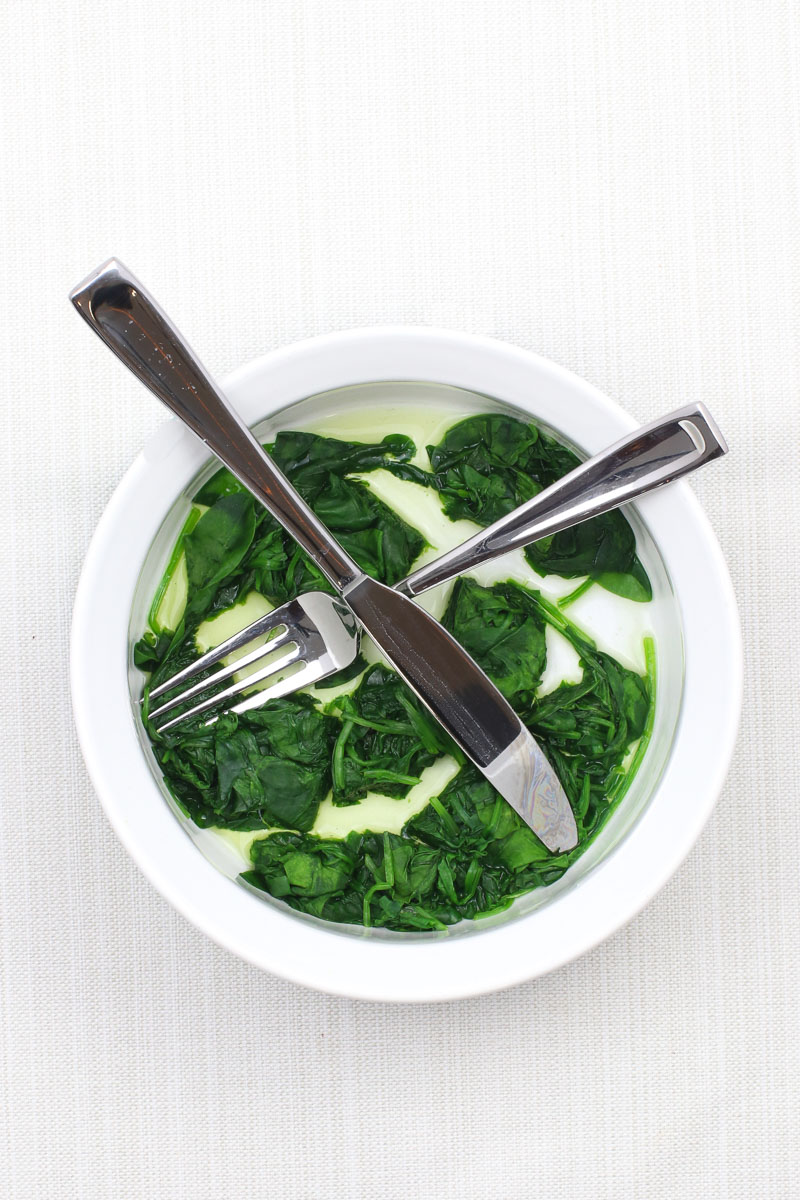 It's easy to chop fresh spinach by cooking it first!

Why I Love this Vegan Spinach Soup

I love this healing vegetable soup because it’s light, delicious and comforting, whether you’re sick or perfectly healthy.

It can be made with fresh ingredients or with stuff you keep on hand in the pantry and freezer. This is especially helpful if you don’t have someone to cook or run to the store for you. 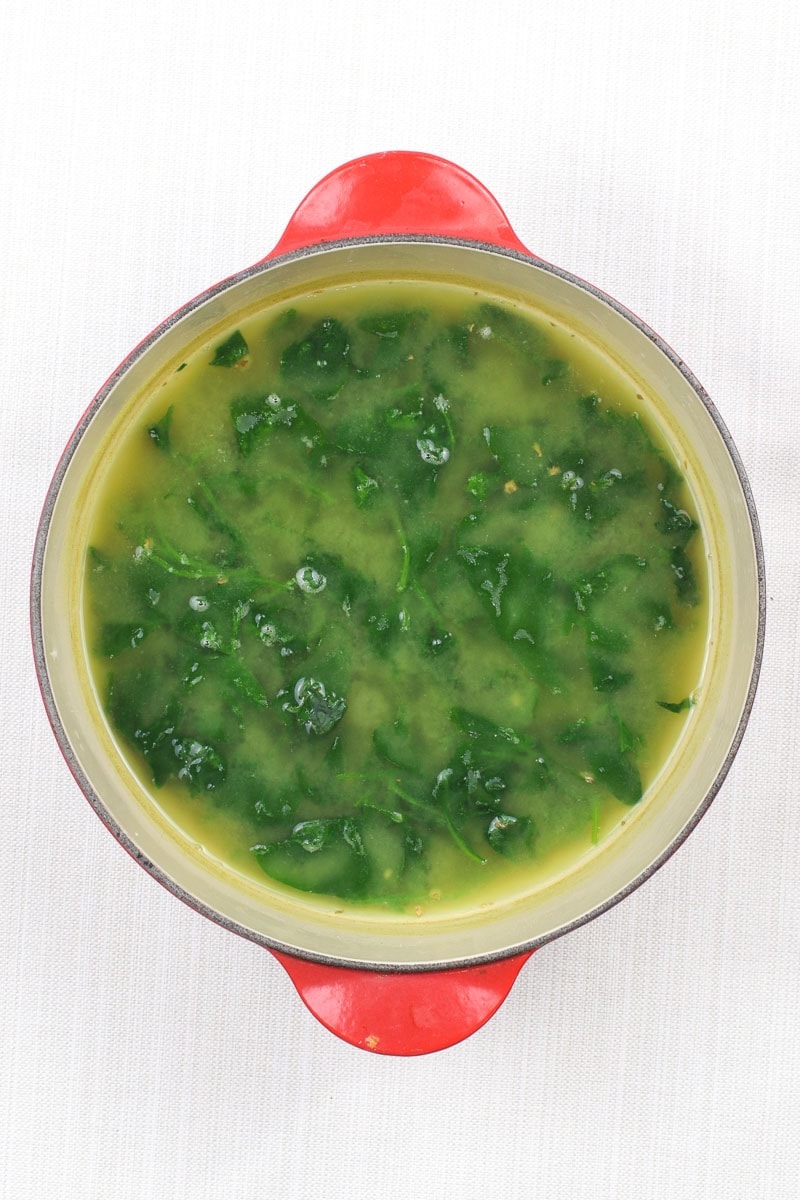 I also love that you can make a truly satisfying version of this vegan spinach soup with ginger broth with only three ingredients.

Or add sliced mushrooms and scallions, minced garlic, rice noodles or the cooked whole grain of your choice—and you’ve got a heartier, but still quite light and soothing soup. 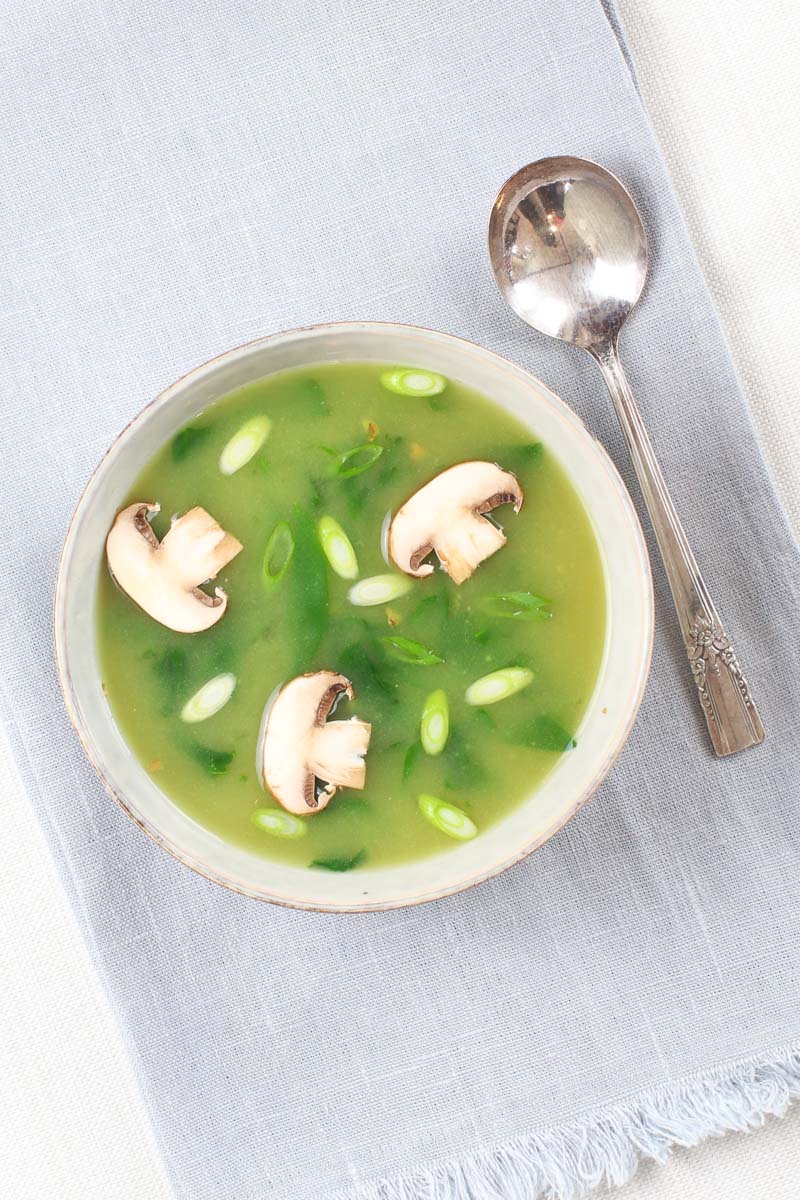 The basic version of this vegan spinach soup with ginger broth—the one I recommend if you’re feeling really unwell—only takes about 10 minutes total.

I’ve even included my ‘neat-and-lazy’ method for chopping fresh spinach. Because the last thing you want to do when you’re unwell is be on your feet in the kitchen. 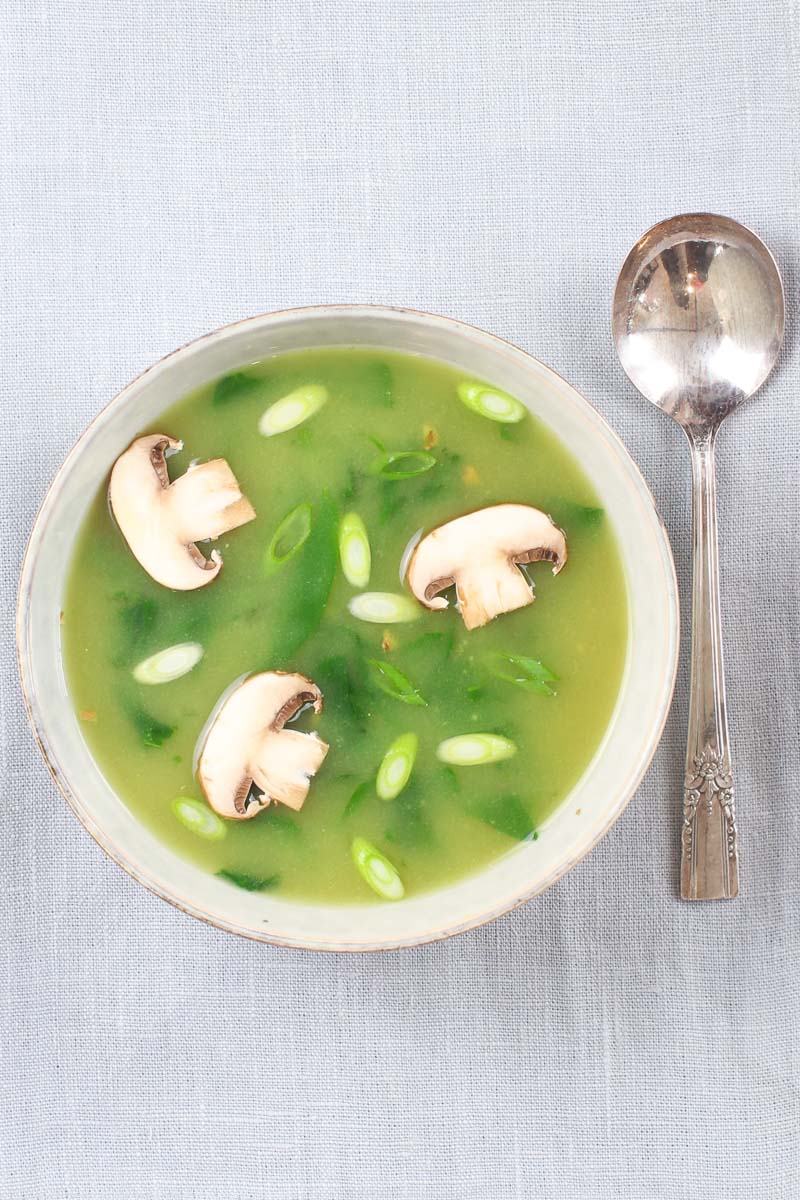 Even if you choose the optional add-ins, you can still pull this healing vegetable soup together in about 10 minutes with very little effort. Doesn’t that make you feel better already? 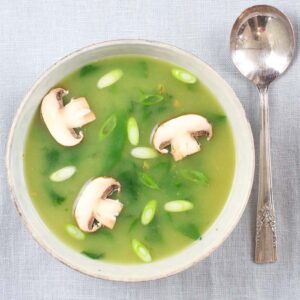 • If you don't want to bother to peel and mince the fresh ginger, cut it into thin slices and simmer in the broth a few minutes longer. Then remove the slices out with a slotted spoon before adding the spinach, or just avoid eating them.